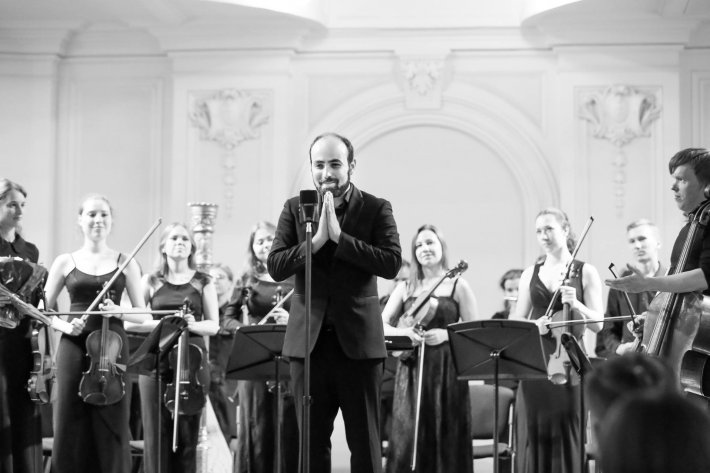 Having graduated from King’s College London in 2016, Jeremy now works at the Moscow State Tchaikovsky Conservatory. While at King’s College London, Jeremy was President and Musical Director of King’s Opera, Musical Director of MSA Musical Theatre and Conductor of the King’s College Chorus. He became Assistant Conductor of the King’s College London Symphony Orchestra in January 2016, having made his international debut with the KCLSO on tour in 2015. Before joining King’s College London, he was Assistant Conductor of the University of Birmingham Medical Society Symphony Orchestra and University College School Chamber Choir. In October 2017, he made his Russian debut with the Student Symphony Orchestra of the Moscow State Tchaikovsky Conservatory in the Conservatory’s Rachmaninov Hall, followed by his debut in the Conservatory’s Great Hall in November 2017. From that point on he regularly works with the Student Symphony Orchestra. He has also worked as Assistant Musical Director on projects with Helios Opera and Late Night Opera (London), and taken part in a series of masterclasses with renowned conductors and pedagogues Colin Metters, Vassily Sinaisky, Teodor Kurrentzis and Mikhail Jurovski. Most recently, he was worked as assistant conductor for a production of Pashkevich’s comic opera ‘The Miser’ at the Opera Theatre-Museum of the Stanislavsky House. Jeremy founded the Strand Chamber Orchestra in February 2017 and conducted their inaugural concert, followed by a fully staged production of Le Nozze di Figaro at Longhope Estate in July 2017. Upcoming engagements include projects with the Student Symphony Orchestra of the Moscow State Tchaikovsky Conservatory, the Opera Theatre-Museum of the Stanislavsky House, the Strand Chamber Orchestra and the new Moscow-based chamber orchestra ‘Leggiero’ (including an invitation to conduct the world premiere of an opera at the Diaghalev Festival in May 2019).

Jeremy is also an experienced singer, having studied with Henry Herford at the Birmingham Conservatoire as a music scholar of the University of Birmingham and Neil Mackie at the Royal Academy of Music whilst at KCL. Highlights include the title role in Bizet’s Le Docteur Miracle, Cecco in Haydn’s Il Mondo della Luna, Don Basilio and Don Curzio in Le Nozze di Figaro and Captain Corcoran in HMS Pinafore; oratorio performances include Handel’s Messiah, Mozart’s Requiem, Pergolesi’s Magnificat in C and Beethoven’s Mass in C.