The opening concert of the Festival will be at the Farabi Hall in Ankara with Virtuosi di Praga Orchestra from Prag/ Czech Republic, accompanying Sefika Kutluer, on December the 3rd, 2019 at 7:30 pm.

The Virtuosi di Praga Orchestra have performed several concerts with Sefika Kutluer at different venues and cities of the European Union. They have also accompanied her on  Kutluer’s Mevalana CD , which is one of her 17 internationally distributed Cds.

The concert will be repeated next day and Kutluer will travel to Prag on december the 17th to perform a Christmas concert with the same orchestra. 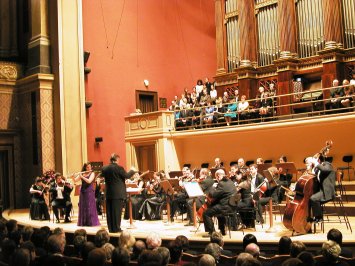 After winning several international competitions and launching her truly international career as a soloist, she was awarded the presidential Medal in Turkey, in 1985, the highest honor that country bestows on an individual, and in 1998 she became a "State Artist". She has been decorated with “Cavaliere dell’Ordine della Stella della Solidarieta’ Italiana”- State Medal – by the President of Italy and with "Austrian Gold Medal of Merit" by the President of Austria, the “Cultural Medal” of the Republic of Kazakhstan and Slovak Republic’s special award - the “Golden Medal of Honour”.

She has been appointed as the “Goodwill Ambassador of Unicef”.

We’d like to extend our gratitude to the Ankara University Rectorate for providing the venue.