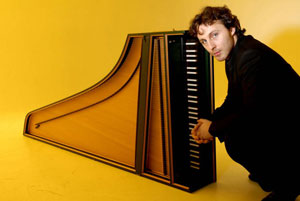 The English harpsichordist, David Wright received no musical training as a child and taught himself to play ‘by ear’.

It wasn’t until he was 16 that he had his first piano lesson and learned to read music, later going on to study harpsichord, organ, and viola da gamba as an undergraduate at Trinity College of Music, where he won the Ella Kidney prize for early music.

He graduated with distinction from the Royal College of Music in 2003 where for two consecutive years he won the Richard the Third and Century Fund Prizes.

In the same year he also won first prize in the prestigious Broadwood Harpsichord Competition - an international event held biannually at London’s Fenton House, home of the historic Benton Fletcher collection of early keyboard instruments, where he subsequently became artist in residence.

As a soloist and accompanist David Wright works regularly with some of the world’s leading ensembles and musicians. He has directed concerts from the harpsichord including the first modern performance of Thomas Arne’s ballad opera The Blind Beggar of Bethnal Green.

He is engaged regularly amongst the artists at Dartington International Summer School and as repetitieur with the English Touring Opera and The English Bach Festival, with whom he has been assistant musical director for several operas.

David’s radio and television broadcasts include performances as a finalist in the York Early Music Competition and soloist at the Handel House Museum London (both for BBC Radio3) and more recently a recital as part of the Belfast Music Festival, broadcast on BBC Northern Ireland.

As a continuo player and soloist he performs regularly with the London Concertante, who tour extensively worldwide.

Just recently, he was assistant musical director to Jean-Claude Malgoire in a production of Rameau’s Platée at the Megaron in Athens with the English Bach Festival, with whom he will be performing Monteverdi’s L’Orfeo in the New Year.

During 2006 and 2007, much of David Wright’s time has been devoted to J.S. Bach's Goldberg Variations (BWV 988), which he has performed extensively though out the UK and abroad.

He has recorded CD’s and he accompanied Sefika Kutluer at her UK tour in the beginning of 2013 and he has joined the 4th International Sefika Kutluer Festival “East Meets West”, in 2013. 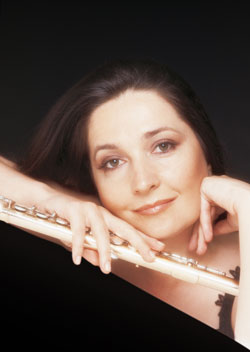 She won the 3rd prize and next year the 1st prize in “ International Flute Contest “ in Vienna.

After winning several international competitions and launching her truly international career as a soloist, she was awarded the presidential Medal in Turkey, in 1985, the highest honor that country bestows on an individual, and in 1998 she became a "State Artist". She has been decorated with “Cavaliere dell’Ordine della Stella della Solidarieta’ Italiana”- State Medal – by the President of Italy and with "Austrian Gold Medal of Merit" by the President of Austria. She has recently been appointed as the “Goodwill Ambassador of Unicef”.

Ian Anderson composed a piece titled “Sefika’s Tango”,specially for her, and she made a concert tour with Jethro Tull playing this piece, as well.

Sefika Kutluer has a large repertoire extending from the Baroque period to the Romantic period and from mystical music to cross-over works from the East and West and has released 16 albums recorded with orchestra, piano and guitar accompaniment. Her albums are released by Pan Classical, Sony Classical, Naxos and Gallo International. Her CD’s are distributed all around the world and her discography receives the reviewer’s and music-lovers’ great appraisal. Sony has awarded her Carmen Fantasy CD, which includes all French repertoire, with a "GOLDEN CD PRIZE". Her "Bach Sonatas" CD has been chosen as one of the best CDs of the year by the reviewers of the American Record Guide. She also received “GALLO GOLDEN CD COLLECTION” award from Gallo International, based in Switzerland. For her exemplary efforts to classical music Gallo has awarded her the honor of having all her albums designated as “Golden Edition” issues.

She has started an international festival in Ankara, which will continue every year during the same period. “The first 3 International Şefika Kutluer Festivals - East Meets West”  ( www.sefikakutluerfest.com ) were organized in 2010, 2011 and 2012. The 4th one is organized in September-October 2013.

European Union Chamber Orchestra has announced her as their permanent soloist.

T.R. Ministry of Culture & Tourism for providing the venue.