Son Jarocho is a musical genre originated in the central and southern areas of Veracruz, a Mexican state located on the shores of the Gulf of Mexico. This music has acquired its own place among of the most popular elements of Mexico’s folkloric tradition. It is performed in every folkloric dance group around the country and some songs, like La Bamba (the Mexican-American band Los Lobos recorded a version of this song in 1987 that became a # 1 hit in the USA and the UK) , La Guacamaya or El Jarabe Loco have reached the category of standards in the repertoire of Mexican music.

This musical tradition started developing in the 16th century, with the Spanish colonization of Mexico. By the beginning of the 19th century it was already a consolidated genre, which incorporated, in a unique way, elements from the indigenous, African and Spanish music coexisting in the Veracruz region. The Son Jarocho is based on string instruments, its rhythms are structured mainly under the scheme 6/8 y 3/4, the lyrics follow the metrics of the Spanish Golden Century and it’s performed in a peculiar form of festivity called Fandango, during which the participants improvise verses and dance on a wooden platform. The sound produced by the footwork of the dance plays an important role in the rhythmic pattern of the music, turning the dancers into percussionists who contribute to a richer composition.

In Son Jarocho we find humor, existential reflections, love stories, legends and, above all, an exaltation of life in its diversity and complexity. Its joyous quality goes beyond the barriers of language and is able to capture the ears and hearts of the audience. That is the reason why this music has become a fundamental element of the cultural identity of Mexico and why the new generations keep listening and dancing to these rhythms. 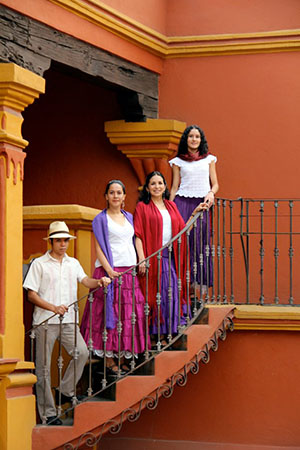 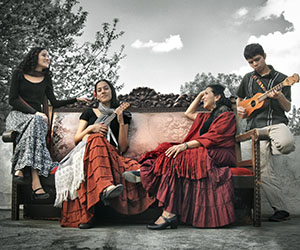 Caña Dulce y Caña Brava came together in 2008, and are one of the few all female Son Jarocho groups. They have been invited to attend and perform at various and diverse national and international events.  Adriana Romero is an internationally recognized harpist. Raquel Vega comes from an important and internationally well known family of of soneros from Veracruz. She is the granddaughter of Don Andrés Vega Delfín, one of the greatest requinto players. Norma Carillo, originally from Mexico City, has played for 17 years with the Carlos Chavez symphony orchestra and has played many different styles of music.

Caña Dulce y Caña Brava comes to life due to the need to interpret the music that its members have inherited from their ancestors: the "Son jarocho". This musical genre expresses through colorful poetics and music the vital experiences of the central-eastern region of Mexico, adjacent to the Gulf of Mexico. Caña Dulce y Caña Brava offers the audience a sound clearly-defined by the feminine voices of their members and shows the increasingly important role that women take in this culture, where music was generally interpreted by men. This group has performed in various stages and festivals both in Mexico and abroad. An essential part of this project is the desire to convey a diverse musical experience, which is why the group is constantly looking to collaborate with other musicians.