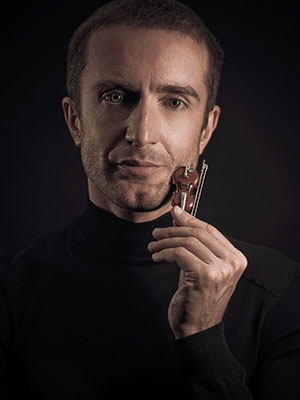 When Tedi Papavrami arrived in France at a young age he found a country and a culture that were entirely foreign to him. With his natural curiosity and his need to master French so as to make the country his own, and also because he was very lonely, he plunged into reading Stendhal, Proust, Flaubert, Dostoevsky, Chekhov, Kafka... but always in French.

What makes this unusual musician unique is his curiosity for what lies over the border. Together with his high artistic and intellectual standards it makes him able to straddle the huge gap between his original background and new horizons. It was therefore no surprise that when the translator Jusuf Vrioni passed away in 2000 Tedi Papavrami took over from him the task of translating the works of Ismail Kadare into French from the Albanian that he had known in his childhood. This literary project also gave him a professional existence outside of the violin.

The violin has always been part of his life. He began playing at the age of five and was taught by his father, a brilliant teacher whose long experience of musical instruction had led him to develop a method for training small children. Tedi progressed very rapidly and within three years he was performing Sarasate's Airs Bohémiens with the Tirana Philharmonic Orchestra. At the age of eleven he tackled Paganini's first concerto, with the fearsome cadenza by Emile Sauret.

The year is 1982. Albania has isolated itself from the rest of the world. By sheer chance the French flautist Alain Marion, who had came to give a concert in Tirana, gets to hear the child prodigy and arranges for him to come to Paris with a bursary from the French government. Tedi went on to study with Pierre Amoyal at the Conservatoire national supérieur de musique and also appeared on popular TV programmes as well as giving concerts at that time.

Having completed his studies at the age of fifteen, Tedi pursued his instrumental and musical development on his own. He had recently defected to France, as had his parents. The Communist regime in Albania took savage reprisals on other family members who had stayed behind, and the sanctions remained in force until the fall of the regime in 1991. So as to stay away from the Albanian embassy officials who were on their tail, Tedi and his parents left Paris and with the help of friends settled near Bordeaux. From there, Tedi launched his career as a soloist and chamber orchestra musician.

In 2003 he appeared on a television programme with Jeanne Moreau: the actress quickly recruited him to play the lead role (alongside Catherine Deneuve, Rupert Everett and Nastasja Kinski) in Josée Dayan's film adaptation of Dangerous Liaisons.

He now lives in Geneva, Switzerland, where he was appointed professor of violin at the Conservatoire de Genève in September 2008.

Tedi Papavrami divides his life between the performing on the violin, chamber music (he is part of the Schumann Quartet, a group that includes a pianist), literary translation, sport, teaching music, and transposing harpsichord and organ music for performance on the violin (works published by Ries & Erler, Berlin). This what he said in an interview in 2010, in response to a question about his career:

What opened my eyes on some occasions in my youth was the relative indifference of the musical world for the child prodigy I had been and was no longer. I was also living in France, which is not often the launch pad for a major international career. I think both of these things were good for my development as a musician and in a technical sense too. I was sufficiently alone and had enough time to go over again and again the whole technical path that my instrument requires, and to adapt it to my personality and my musical aspirations, through a sequence of profound changes that each took five to ten years to complete. So, paradoxically, within a single life, I have been both hugely precocious and a very late developer, learning very slowly and in an utterly painstaking way what only time allows you to achieve.