Kerem Görsev began his adventure in music at the age of 6 when he started studying piano at the classical music conservatory in Istanbul. He continued his musical education at the Istanbul State Conservatory for twelve years until he started to play jazz. His first admirations were for Parker and Miles. After this, he has always liked bop and bebop music. This influence has been persistent throughout his professional life. Kerem Görsev never fails to mention how good he feels when listening to Bill Evans.

In the early years of his career, he has performed at the various clubs in Istanbul both with Turkish and foreign musicians. He has performed in two concerts with Elvin Jones Jazz Machine in Eskişehir Festival in 1999.

Recognized as a talented composer and pianist, he has started his recording with his first album "Hands and Lips" in 1994. Since then, he has produced a total of 13 albums of his own. In his albums, he has explored a wide spectrum- ranging from his duo albums featuring American jazz standards to his orchestral album called "November in St.Petersburg" which consists of his own compositions and is recorded with the St.Petersburg Philharmonic Orchestra. In between lies Kerem Gorsev's other albums recorded in the more traditional, classical jazz trio or quintet formats.

Kerem Görsev had many performances in Turkey and abroad since the early days of his career. In the past ten years, he has performed at various festivals, university concerts and organizations in many cities in addition to Istanbul including Trabzon, Antalya, Malatya, Isparta, Bodrum, Çeme ,Manisa and İzmir as well as international performances in Baku, Vilnius, Copenhagen, Muenster, Coesfeld, Stuttgart, Islamabad, Cyprus, Vienna, and Bologna .

Kerem Gorsev recorded two trio projects, "Orange Juice" and Diversion" in 2005 and 2009 respectively. He has also recorded and released a duo album with Allan Harris in 2007 called "Back Again". This album consists of jazz standards from 1940's and 1960's.

Kerem Görsev had numerous concert performances in Turkey as well as performing at international festivals and events. The following are some of the artist's important concerts: 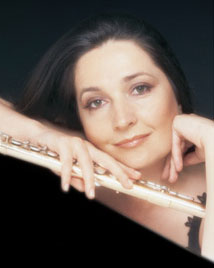 She makes music because she has to; it is something she can't really choose. It is a divine gift of God, a means of touching the divine that only a relatively few people are given on this planet. It is very rare and precious, she is blessed to be one of the chosen ones."

She won the 3rd prize and next year the 1st prize in " International Flute Contest " in Vienna.

After winning several international competitions and launching her truly international career as a soloist, she was awarded the presidential Medal in Turkey, in 1985, the highest honor that country bestows on an individual, and in 1998 she became a "State Artist". She has been decorated with "Cavaliere dell'Ordine della Stella della Solidarieta' Italiana"- State Medal – by the President of Italy and with "Austrian Gold Medal of Merit" by the President of Austria.

Ian Anderson composed a piece titled "Sefika's Tango",specially for her, and she made a concert tour with Jethro Tull playing this piece, as well.

Sefika Kutluer has a large repertoire extending from the Baroque period to the Romantic period and from mystical music to cross-over works from the East and West and has released 16 albums recorded with orchestra, piano and guitar accompaniment. Her albums are released by Pan Classical, Sony Classical, Naxos and Gallo International. Her CD's are distributed all around the world and her discography receives the reviewer's and music-lovers' great appraisal. Sony has awarded her Carmen Fantasy CD, which includes all French repertoire, with a "GOLDEN CD PRIZE". Her "Bach Sonatas" CD has been chosen as one of the best CDs of the year by the reviewers of the American Record Guide. She also received "GALLO GOLDEN CD COLLECTION" award from Gallo International, based in Switzerland. For her exemplary efforts to classical music Gallo has awarded her the honor of having all her albums designated as "Golden Edition" issues.

She has started an international festival in Ankara, which will continue every year during the same period. "The 1st & the 2nd International Şefika Kutluer Festivasl - East Meets West" ( www.sefikakutluerfest.com ) were organized in 2010 and 2011. The 3rd one will be organized in September-October 2012.

European Union Chamber Orchestra has announced her as a permanent soloist.