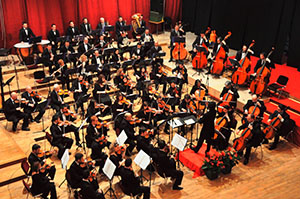 Kosovo Philharmonic Orchestra is established after the last war in Kosovo in the year 2000 with the initiative of some distinguished Kosovar musicians. Initially it started as a string ensemble and later as a chamber orchestra but with no doubt it represents the continuation of the famous ex -Symphonic Orchestra of the Radio and Television of Prishtina, whose activity was ceased forcibly in 1990 by Serbian regime. After the consolidation of the state institutions; regular activities of this important music institution is supported through the Ministry of Culture. In 2004 the Ministry of Culture decided to add the institution of the Opera of Kosovo to the Kosovo Philharmonic structure. The Philharmonic Orchestra performs many important symphonic and opera concerts within the regular annual seasons. The repertoire of its performances included world known and Albanian composers of all styles. Many soloists performed accompanied by the Kosovo Philharmonic Orchestra such as: Inva Mula, Tedi Papavrami, Pavel Vernikov, Kevinn Kenner, Sihana Badivuku, Antonio Gashi, Venera Kajtazi, Lejla Pula, Blerim Grubi, M.Kaçamaku, Andreas Reiner, Franc Kosem, Boštjan Lipovšek, Ardita Statovci, Fatos Jaho, Romain Leleu, Thomas Gould. It had the privilege of collaborating with conductors like; Bahri Çela, Pavle Deshpali, Ermir Krantja, Tadeusz Serafin, Le Fi Fi, Arbër Dhomi, Zhani Ciko, Tomislav Šopov, ToshioYanagisawa, Claudio Buchler, Baki Jashari, Bajar Berisha, Desar Sulejmani, Alexander Prior, Rene Gulikers. From 2007 the chief conductor of Kosovo Philharmonic Orchestra is maestro Toshio Yanagisawa (Tokyo).

Baki Jashari (1960 Pristina-Kosovo) Albanian composer and conductor. He graduated in composition with Prof. Daniel Skerl at the Academy of Music in Ljubljana / Slovenia (1984). He also attended studies for Musicology at the Faculty of Philosophy until 1985. After graduation he returned to Kosovo and directed the Professional Choir of Pristina Radio-Television (1987-90). In 1990-2000 he lived in Slovenia where he taught music theory and conducted the String Orchestra at the Ljubljana Music School. Since his student days B.Jashari was engaged as a conductor with Slovenian choral ensembles performing concerts in Slovenia, Italy, Austria and Germany. With Professional Choir of Prishtina Radio-Television he took part in the most important activities of Kosovo and ex-Yugoslavia such as Prishtina Musical Stage, Days of Kosovo Music and Tribune of ex-Yugoslavia Musical Creativity in Opatija (Croatia). As a conductor of the String Orchestra of Ljubljana Music School (1993-2000) he performed concerts in Trieste, Vienna, Barcelona, Chicago, Cleveland etc. He also conducted two Wind Orchestras, which were taking part in the Slovenian and international competitions. In Kosovo, B.Jashari conducted the Kosova Philharmonic Orchestra with noted musicians like Pavel Vernikov (violin), Florian Stubenvoll (clarinet), Kevin Kenner (piano) etc.

As a composer, B.Jashari has created choral works, various orchestral pieces and compositions as Passacaglia for string orchestra, Pakëz në ëndërr, pakëz në zhgëndërr (A little bit in dream, and awaken) for narrator and mixed choir, Lutje (Praying) for mezzosoprano and piano, Music for harp and string trio, Sinfonietta in due tempi for large orchestra, Nji lule for mixed choir, Miniature for cello and piano etc. From 2000 he is a professor of Harmony and Analytic Harmony at the Music Faculty in Prishtina. Currently he is the Director of Kosovo Philharmonic Orchestra.